Behind the Scenes of Our New Featured Exhibit 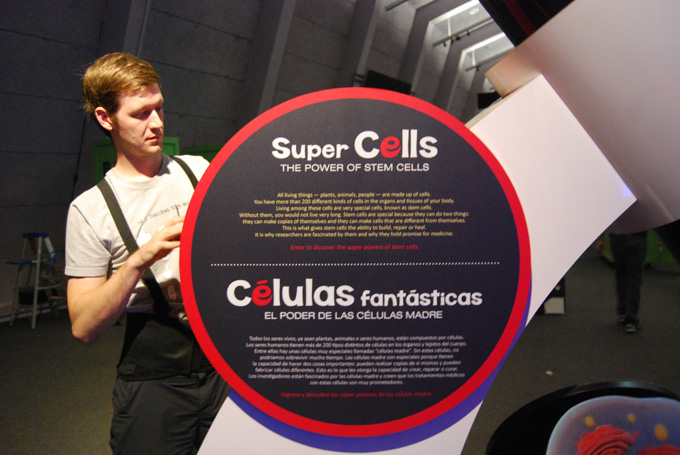 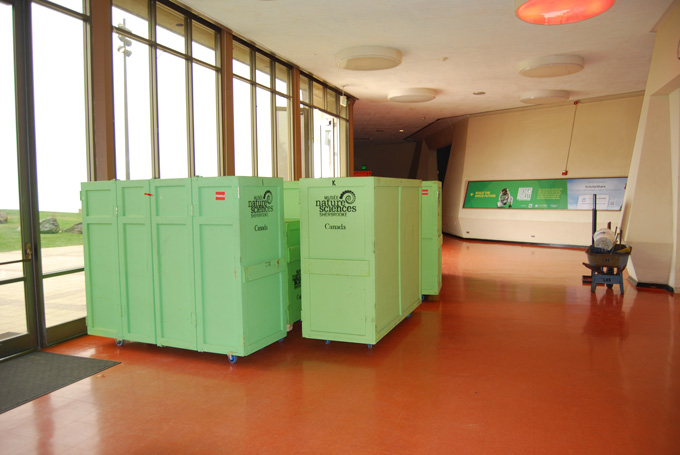 On the morning of September 12, a huge truck pulled up outside the Lawrence Hall of Science. No, it was not here to take Pheena the fin whale off the plaza again. Instead, crate after lime-green crate was unloaded from the truck and brought into the Hall. These crates, labeled Sherbrooke Nature Science Museum, contained Super Cells, our new featured exhibit!

As the crates were unloaded, the exhibit began to take shape on the museum floor. A giant microscope with an interactive projection of a lizard regrowing its tail was the first piece to be placed. Soon, other elements were carefully unloaded and moved into position, such as lab equipment and interactive quiz games about the exhibit’s content.

Allan Ayers is an exhibit developer at the Hall. When asked if installing Super Cells presented any unique challenges, he said, “This crew has been installing traveling exhibits for over a decade together, so at this point we’re a well-oiled machine.” The team also had help from a technician visiting from the Sherbrooke Museum, which developed the exhibit.

As an experienced team, Allan and the crew were not fazed by having to make some adjustments along the way. In order to properly light some elements, they had to modify the original floor plan of the exhibit. Luckily, this on-the-fly change was easy to make, as the exhibit is relatively compact.

“It’s fun to have a tidy traveling exhibit that fits into a portion of Holt Hall. Past traveling exhibits have essentially taken over the whole museum, displacing most of our permanent exhibits,” Allan says. “It’s great to have something that’s an added surprise to come across, nestled among KidsLab, Design Quest, and other familiar experiences our visitors have grown to love.”

Perhaps one of the more interesting things about the exhibit is that it is multilingual, with almost all of the content available in English, Spanish, and French. As the various computer-based components were powered up, trilingual messages rolled across the screens, ready to educate a diverse group of visitors at the Lawrence Hall of Science.

Super Cells is presented by the Stem Cell Network and produced by the Sherbrooke Museum of Nature and Science, in partnership with the California Institute for Regenerative Medicine, Catapult Cell Therapy, and the Centre for Commercialization of Regenerative Medicine, with contributions from EuroStemCell. It will be at the Lawrence Hall of Science through Nov. 27.